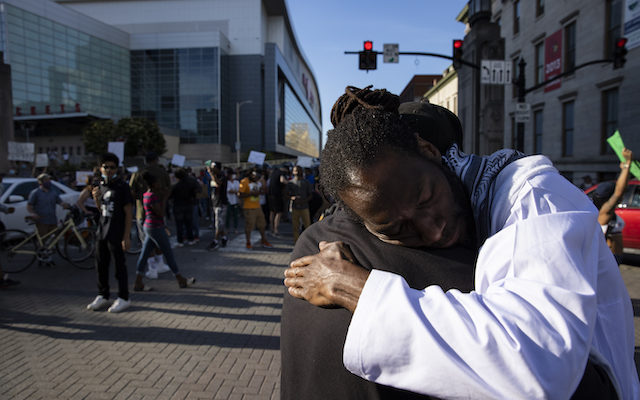 The past few days have been hard to swallow for most Americans. Whether it is just coming to understand that there is a problem with systemic racism in our country which leads to police brutality or finally being fed up with the unfair treatment and targeting of minorities by law enforcement. With mostly peaceful protests happening, there is always the risk of violence breaking out. In some communities, mostly larger cities like Los Angeles, Houston, New York City, and the like, the pain is real and the protests have seen some violence between protesters and police. However, there are breakthroughs happening in some communities across America.

In Flint, Michigan police officers lay down their batons and take off their helmets and being walking with protesters.

Holy shit, this is amazing.

Cops in Flint, MI have laid down their batons and taken off their helmets after protesters chant #WalkWithUs.

“We want to make this a parade.”pic.twitter.com/5JAqqjqEvV#Sundaymorning

In Brooklyn, protesters block the entrance to a Target store that was in fact, targeted by looters. The protesters were encouraging to keep things non-violent.

Some protestors in Brooklyn calling to loot the Target, but organizers are rushing in front of the store to stop them, keep things non-violent #nycprotest pic.twitter.com/6x70cpcjep

Miami, Florida was also impacted. As peaceful protesters approached their destination Miami police laid down their gear and got on one knee to ask for forgiveness.

“Miami police outclassed every police of the world. When protestors came gun glazing, they all went on their knee. The crowd begin to cry and joined them.
Prayers of forgiveness melted many hearts “

Santa Cruz Police in California tweeted that they are fully supportive of peaceful protests and even joined the community.

SCPD is fully supportive of peaceful protests @CityofSantaCruz and we always keep them safe.

In San Antonio, Texas the protests and demonstrations had ended and everyone was headed home when a group of bad actors, not associated with the protest at all began breaking windows and defacing public property and art. Citizens of the city came together the next morning to clean up the broken glass and graffiti.