Clashes Between Law Enforcement and Protesters Erupt in Multiple Cities 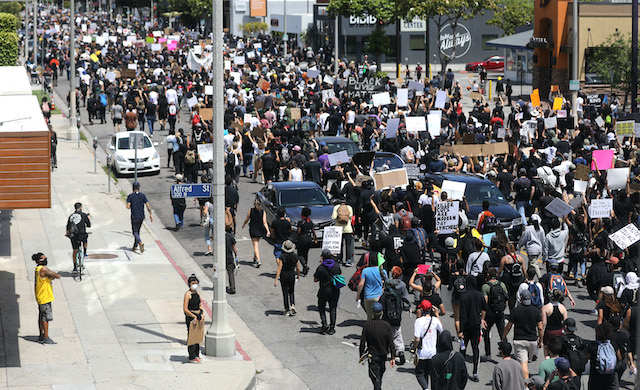 Today in many of America’s most prominent cities, violent clashes erupted between protesters and law enforcement. At least eight states have called out the National Guard while protesters light fires to police vehicles and additional cities are put under curfew. Curfews that were imposed in 25 cities in 16 states have long expired with protesters still out on the streets.

Washington D.C. activated the National Guard to help protect the White House and to assist DC police in handling the protests. According to a statement from the DC National Guard, “THE DCNG is always ready to assist district and federal agencies to protect human life and property.”

Minneapolis, MN which has become the epicenter for fiery protests, has seen another night of violence. With police firing tear gas at protesters near the 5th precinct and in turn, some of the protesters have responded with projectiles of their own. Protesters were also tear-gassed when trying to cross a bridge from Minneapolis going into St. Paul.

In Los Angeles, rubber bullets were fired at protesters who claim that they were peacefully protesting and then could not continue their march when LAPD blocked their progress…that’s when police fired rubber bullets into the crowd to try to get them to disperse.

In Houston, over 100 protesters were arrested last night and more today as protests continued. 8 officers were injured and 16 vehicles were damaged. There are no reported injuries to protesters, the vast majority of whom assembled peacefully.

In Miami, city officials have postponed what was supposed to be a celebration planned in honor of the city’s hospital workers in fighting Covid-19. The mayor of Miami Francis Suarez says, “The sound of fireworks could easily be mistaken for explosions, and we want to make sure that all of our residents are safe and able to exercise their First Amendment rights to protest without any fear of violence.” Protests in Miami started out as peaceful, but have become unruly and there is growing concern that protesters are creating a dangerous situation for themselves as they move their demonstration to I-95.

The police in Cincinnati have arrested 11 people at protests on Saturday. The offenses range from disorderly conduct to breaking and entering and resisting arrest. One person and one officer were treated for minor injuries.

Chicago mayor Lori Lightfoot has announced a curfew that went into effect at 9 pm CT that will be “nightly until further notice”. The mayor went on to add, “What started out as a peaceful protest has now devolved into criminal conduct.” The mayor’s expectation of the citizens of Chicago was that “most people who have been peaceful today are going to go home. But if they don’t then we will give the police department another tool to use to enforce the curfew.”

In most cases, people that are doing the protesting are not the problem. Which is the case in Philadelphia as well. Philly mayor Jim Kennedy said, “The people who were actually marching for a purpose were not the problem. It was this ragtag group of people who were destructive folks, who were doing the things to our officers, to the buildings, setting cars on fire, those types of things. So, we will get through this, we will get cleaned up, we’ll get secured, and we’ll move on.”