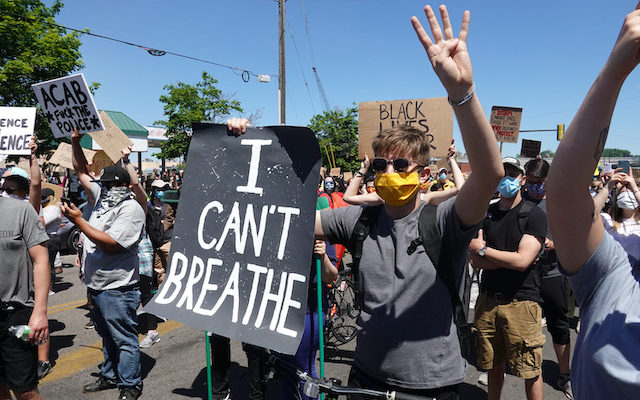 Protests have taken hold in at least 30 US cities over the US. Here is what is happening now.

Minnesota’s Governor Tim Walz has made it clear that protests in Minneapolis and St. Paul are being fueled by outsiders who are “attacking civil society and instilling fear and disrupting our great cities” rather than demanding justice for the death of George Floyd. Both the governor and the Mayor of Minneapolis, Jacob Frey have said that the vandals are largely nonresidents of the cities and state with no real interest in the death of George Floyd. Gov. Walz estimates that only 20% of protesters are from Minnesota.

After a long night of for the LAPD last night, protests resumed in earnest earlier this afternoon as police vehilcles were vandalized. Protesters have repeatedly said that demonstrations always begin peacefully with a march, but then said that police tried to hold them off from moving forward and that’s when confrontations began happening. No arrests have been made

Ohio Gov. Mike DeWine has announced that he is activating the National Guard to help protect citizens in response to protests across the state. DeWine said, “Sadly there is a relatively small number of violent individuals who pose a specific threat and a real threat to our law enforcement officers and the safety of people in Columbus and Franklin County.” The governor said that although a vast majority of protesters just want to be heard, they are being drowned out by the violence from a small group of people. DeWine is also asking the State Highway Patrol to help law enforcement in Columbus at the request of the mayor.

Protests are already underway in Austin, Texas where a crowd of individuals has overtaken the I-35 freeway and blocked both lanes of traffic.

BREAKING: Protestors have now blocked the main lanes of I-35 in downtown Austin. pic.twitter.com/LZmYFxSJi3

As tensions escalated, police began using pepper spray, rubber bullets, and tear gas to disperse the crowds. Protests have moved from the freeway to the state capitol as well as in front of the Austin Police Headquarters.

Citizens of San Antonio have planned a peaceful vigil to honor the deaths of George Floyd as well as others who have died at the hands of police brutality in the city’s downtown area. A group of counter-protesters is already assembled at the Alamo encouraging “open carry” of weapons to “Defend the Alamo”.

here’s the Facebook listing for the armed gathering at the alamo — it’s only a couple blocks away from Travis Park where the peaceful protest is planned for today by the Brown Berets in support of George Floyd’s memory and the Black Lives Matter movement — please be safe https://t.co/tPnjXQZnVn

Philadelphia police tweeted Saturday that while earlier protests at City Hall and the Art Museum we peaceful, a group has since convened around the Center City and are committing “criminal acts, including vandalism.” Police are encouraging everyone to refrain from entering Center City.

..vandalism. Those acts will not be tolerated, and we strongly encourage everyone to refrain from entering Center City. We will continue provide updates throughout the evening.

The city of Chicago tweeted earlier today (Saturday): “This weekend, multiple protests, marches, and rallies are expected in Chicago’s Downtown area.” “Chicago police will continue to work with rally organizers to provide the safest routes for marches and to ensure the protests remain peaceful.” Since then, aerial footage can be seen showing protesters in Chicago vandalizing police cruisers as well as some protestors throwing water bottles at officers in riot gear. People were also seen lifting barricades and other objects and throwing them toward police cars.